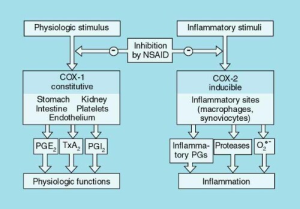 HOW? Will block COX-2 to reduce inflammation [GOOD] but also block COX-1 [BAD]

PGE2, remains a critical factor in gastric homeostasis. Prostaglandin E2 inhibits acid secretion through the EP3 receptor and the fluctuation of its levels as a result of NSAID therapy remains a major concern in preserving the integrity of the gastric mucosa

This site uses Akismet to reduce spam. Learn how your comment data is processed.