Metformin belongs to the Biguanide class of medications used to treat Type 2 Diabetes. Metformin works by decreasing the amount of glucose produced by the liver, improving insulin sensitivity, and by increasing cellular uptake of glucose.

In patients who develop acute or chronic renal failure, the clearance of metformin is decreased resulting in an increased risk of lactic acidosis, which may have a mortality rate up to 50%. Patients who receive IV contrast fluid are at risk for contrast-induced nephropathy and if they are concurrently on metformin, they may experience potentially fatal lactic acidosis. To avoid this issue, most patients scheduled to receive IV contrast have their metformin medication stopped at the time of contrast administration for at least 48 hours after the procedure.

In some patients who have preserved renal function and are receiving small amounts of contrast (< 100 mL), stopping the metformin may not be necessary because the risk of contrast-induced nephropathy is very low in these patients.

Hydrochlorothiazide (HCTZ) is a thiazide diuretic that acts in the distal convoluted tubule of the kidney on the Na/Cl- symporter to reduce blood pressure/ volume. However, like any medication it comes with side effects. A common mnemonic used to remember these effects is HyperGLUC.

HYPERglycemia (It occurs at higher doses of HCTZ (> 50 mg/d); Thiazides have a weak, dose-dependent, effect to stimulate ATP-sensitive K+ channels and cause hyperpolarization of beta cells, thereby inhibiting insulin release)

NOTE: It can have HYPO effects in serum: including HYPOkalemia, HYPOnatremia and HYPOtension (decreases blood volume and peripheral vascular resistance)

Non-traumatic ANFH is a serious and common problem that can occur when patients are on glucocorticoid (GC) therapy; between 5-40% of patients treated with long-term glucocorticoid therapy will develop ANFH.

Although, the exact and complete mechanism of ANFH due to GC therapy is still under determination, a few mechanisms have been proposed.

Macroglobulin (A2M)* gene and also by exerting effects on thrombosis formation. It is believed that through A2M and thromobosis formation alterations, GCs cause ischemia which ultimately results in ANFH.

A2M: a protein that plays a role in thrombosis by influencing inflammation, cell shedding, inhibiting fibrinolysis, and hemostatic plug formation.

It is hypothesized that angiogenesis is interrupted in patients with ANFH, however, the complete mechanism is not well understood.

Studies have shown that there is a relationship between ANFH and expression of VEGF. VEGF plays a key role in stimulating angiogenesis, but is also important in bone formation and repair. It has also been shown that when bone tissue undergoes VEGF gene transfection, the processes of angiogenesis and bone repair in necrotic bone are stimulated. These studies suggest that there is a correlation between use of GCs and angiogenesis suppression, however it remains to be more completely elucidated.

Although, the link between increased adipogenesis and long-term use of GCs is not completely understood, studies have shown the presence of an association.

Kim et al. (2008) looked at the association between sterol regulatory element binding factor (SREBP-2) gene polymorphisms and the risk of ANFH in the Korean population. SREBPs play a role lipogenesis, cholesterol homeostasis, and adipocyte development. In 2009, a study by Lee et al. showed that a polymorphism in intron 7 of the SREBP-1 gene was associated with increased likelihood of ANFH. Although, the relationship is still unclear, these studies do suggest the possibility of alterations in adipogenesis by GC therapy.

Bone morphogenetic proteins (BMPs) are proteins that are important in maintaining bone density through remodelling and repair processes. BMPs act as signals, or differentiating factors, which help convert mesenchymal cells into cells involved in forming bone and cartilage. Studies have shown that transfecting bone marrow stem cells with the human BMP-2 gene can repair early-stage ANFH. The results of these studies suggest that in ANFH, bone remodelling and repair may be altered by the use of GCs.

HOW? The mechanism appears to be multi-factorial.

The profound damage to the liver results in: hypoglycemia, hyperammonemia, coagulation defects,

and hepatic encephalopathy occurs in the context of fulminant liver failure.
REFERENCES

NOTE: Other causes of hyperprolactinemia include severe systemic illness such as cirrhosis or renal failure, pituitary tumors, idiopathic sources, and pregnancy.

Digoxin [Antiarrhythmic (Class III)] competes with Potassium for binding to cellular Na+/K+ ATPase pumps. Hypokalemia predisposes the patient to Digoxin toxicity. Most common arrhythmia associated with Digoxin toxicity is paroxysmal atrial tachycardia with 2:1 block. However, Bradycardia can occur and presence of a bidirectional ventricular tachycardia is practically pathognomonic for Digoxin toxicity!

HOW?? When potassium levels are low, it allows increased Digoxin binding to ATPase pumps to exert its inhibitory effects.

NOTE: Digoxin toxicity can cause Hyperkalemia (Digoxin inhibits Na+/K+ ATPase, so K+ remains in the plasma). In theory, if you give IV Calcium it can cause an influx of Calcium into the cardiac myocytes resulting in a non-contractile state (the so called “Stone Heart“). 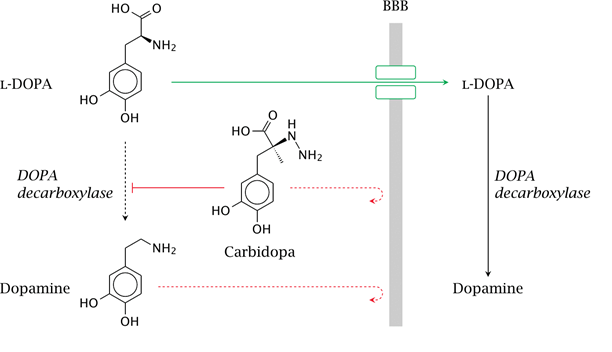 Dementia with Lewy bodies (DLB) is the second most common cause of neurodegenerative dementia in the elderly (accounting for 15-20% on autopsy- => alpha-synuclein deposition).

It is characterized as clinically: 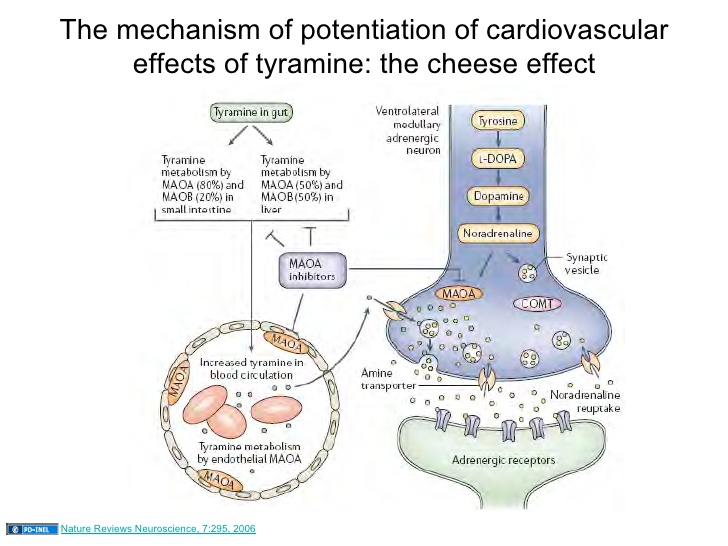 MECHANISM: Tyramine is a byproduct of Tyrosine metabolism by MAO in the liver. Typically it will have low bioavailability due to extensive first-pass effect in the liver.

If the patient is taking a MOA inhibitor, Tyramine accumulates in the bloodstream; it has indirect sympathomimetic action causing the release of stored catecholamines. This is known as the “Cheese effect”!!!

Onset is typically rapid (15 mins- 1hr); the hallmark presentation of the Tyramine “Cheese” reaction are HYPERTENSION + SEVERE HEADACHE (occipital or temporal), palpitations, nausea and vomiting. Typically resolving within 4-6 hours, however can be fatal!

NOTE: Selegiline (MAO-B selective) and rasagiline do not functionally inhibit MAO-A and are not associated with the “Cheese effect” with doses typically used in clinical practice!

**pregabalin may have some pharmacokinetic advantages over gabapentin; This may be the reason for improved pharmacodynamic effect.